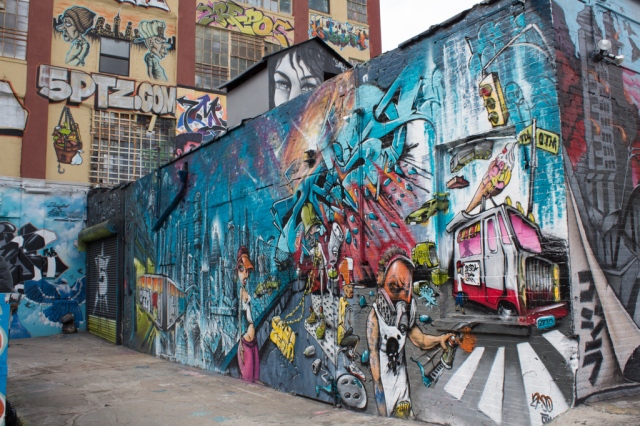 At the same time New York City tourists and residents scramble to see and snap photos of the latest graffiti artwork by international phenomenon, Banksy, who’s in the city for a month (more on that from UntappedCities), the aerosal artworld got some bad news. The City Council approved a $400 million proposal to tear down 5 Pointz, the world’s largest display of spray art located in Long Island City, Queens, and put in its place residential glass towers, replete with space for commercial use, landscaped outdoor areas and art studios. 5 Pointz founder Jonathan (Meres) Cohen has curated the street art space since 2003.

The land owner, Jerry Wolkoff, who proposed the plan has, for over a decade, allowed artists from around the world to use the walls of the dilapidated, 200,000-square-foot factory warehouse, as canvas. In a hearing about the plan on October 2, Wolkoff said he will allow artists to continue to create aerosal art on the walls of the base levels and will give local artists preference in using the studio space. However, the space offered with the new plan and the variance, which was approved during a City Council vote on October 9, represents only 6 percent (12,000 square feet) of what is currently available. And, there are other issues, which 5 Pointz artists and supporters who testified in opposition of the plan shared in the October 2 hearing. You can see the entire video, here.

I finally ventured out to 5 Pointz on Sunday to take some photos. It was a doozy of a trip, especially since the 7 Train wasn’t running. A friend commented before I went that because the art is so vibrant, so colorful, so impressive, well, it’s impossible to take a bad photograph there. I think she was right.

While I was there, I couldn’t help but be reminded of The Candlewoood Playhouse, a small, professional suburban theater in Connecticut near my hometown. Candlewood, which opened as The Meadowbrook Playhouse in 1965, met its demise in 1999. Bernadette Peters, Jack Benny and Marlene Dietrich were among some of the acclaimed talents that graced the Playhouse’s stage (me too, but only for auditions). In its place, a giant supermarket was erected.

Now when I drive by, instead of seeing the marquee with the list of upcoming shows, parking and seeing one, well, I can stop in and buy 25 different kinds of salad dressing. The same experience will surely come to pass when folks who had taken graffiti tours of 5 Pointz with their classmates and Grandmaster Flash pass by the new glass towers (for a stunning data visualization of the city’s, including LIC’s, dramatic landscape transformation under Bloomberg, visit The New York Times).

It just makes me wonder: As a culture, what do we want our legacy to be? Art or salad dressing?

5Pointz has filed a lawsuit to block the demolition, according to DNAInfo.

One thought on “5 POINTZ: What Do We Want Our Legacy To Be?”